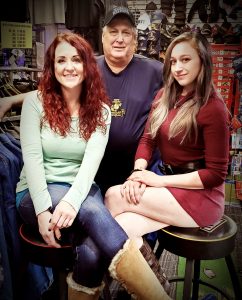 From Left to Right: Megan, Karl and Regan

Karl Snyder has always had an entrepreneurial streak and a patriotic streak.

“I have been in business for myself since I got out of the Marines in 1976,” Snyder said. “I have had tons of businesses, some good and some bad.” Among the good businesses, Snyder lists the Dugout Bar & Grill in Topeka and Custom Truck & Equipment in Kansas City. Snyder, who retired in 2006, no longer owns these businesses.

Snyder decided to come out of retirement after his daughter, Regan, graduated from high school. “Regan said that she didn’t want to go to college,” he said. “I told her we ought to start a little company so she could learn how to keep books and talk to people.”

Snyder, who is a disabled veteran, noticed that guys from St. Louis and Tulsa would set up tables at the VA Hospital in Topeka and sell hats and other military-related items to veterans. However, they didn’t sell patches. He saw an opportunity to combine his entrepreneurial and patriotic streaks.

“I told Regan that, with my background, I thought the VA would let us set up a table in the hospital to sell patches and other items,” Snyder said. “So, I went to the chief of the VA in this area and he said, ‘You know, we want someone local instead of bringing these guys from out of town because they can’t stay very long.’ The out-of-town vendors could come in for only a week at a time.

“When the vets go to the VA, they have to go there early in the morning to have their blood taken. And then they have to wait two hours for the results before they can get to their doctor appointments. Sometimes they wait three hours. There’s not much for them to do while they wait, so our table gave them something to look forward to. In 2014, we started with just a little table with hat pins and hats, just like everyone else. But we also started bringing in the patches.”

“I told Karl that there are a bunch of Seabees in this area,” Ramirez said. “He found that out very quickly.” Snyder, who has set up a table on the Marine Corps birthday celebration every November 10 for many several years, now sets up a table when the Seabees celebrate their birthday on March 5.

The Snyders also started doing gun shows and festivals, such as the SantaCaliGon Days Festival in Independence, Missouri. The more shows they did, the more inventory they got in. Their two tables at gun shows eventually grew to 10 tables. “At fi rst, Regan didn’t like this business,” Snyder said. “But then she started getting into it. She took care of all the shipping and receiving. She took all the logs for all the customers.

Because we were doing all the patches, we started getting into leather. We started taking orders for honor vests and honor jackets. Regan learned how to do all of that.”

But then illness threatened the survival of the father-daughter business. “Three years ago, I got pancreatitis and they thought that I was going to die,” Snyder said. “The business was my daughter’s source of income. She said, ‘Dad, you’re in the hospital. I can’t do these shows by myself. I have to get a regular job until you get well.’”

So, the Snyders put all their inventory into storage and Regan went to work for Amazon.

“She went into shipping and receiving and, within three months, she was in management,” Snyder said. “She was only 18 years old and she had people working for her who were college graduates. Right now, she is in Memphis to set up a new warehouse.”

Once Snyder regained his health, he had to decide what he would do with all the inventory and equipment he and Regan had put into storage.

“We went to a flea market/antique mall in Topeka and had the largest booth there for several years,” Snyder said.

Unfortunately, Snyder and the flea market/antique mall had a falling out over the logo for the U.S. Army’s 25th Infantry Division. The insignia of the 25th Infantry Division, which has the nickname “Tropic Lightning,” features a single lightning bolt. Another vendor complained, claiming, incorrectly, that the insignia was a Nazi logo. The Snyders had to find a new home for their inventory.

“So, I decided to open up this store,” Snyder said. “I was here October 1 of 2018, but I wasn’t going to open until the first of the year. I backed up my U-Haul and started hauling stuff in and setting up tables. I started putting stuff on the tables and, all of the sudden, I already had 10 people in here digging through stuff . I did about $500 worth of business that day.”

Today, American Patriotic Supply has the largest selection military items and patches in the Midwest. The store, which is owned by Regan and managed by Snyder, is located in the Brookwood Shopping Center in Topeka. They now have over 5,000 different patches.

“I build my inventory on what customers want,” Snyder said. “If someone orders one patch, I buy two.” In addition to items for those who have served or are currently serving in the military, American Patriotic Supply offers items for bikers.

“When we started this in the VA hospital, members of biker clubs, such as the Combat Veterans Motorcycle Association, would visit our table,” Snyder said. “They said, ‘You need to do one of our bike rallies.’ So, I went out to an ABATE function and I was bombarded. Bikers are the most patriotic group that you’ll ever meet. They really support the vets. We now go to a lot of biker rallies, where we sell leather for honor jackets. About every biker buys patches. They love our selection of patches.”

Some of the messages offered on biker patches include “Biker Clubs Are Not Gangs,” “Broken Bone Club,” and blood types.

“We’re a great gift shop,” Snyder said. “We do all the spirit bells. After Vietnam, bikers came up with guardian bells and put them on their bikes to protect them when they ride. Now there are more than 300 different bells. I have a lot of grandparents who come in to buy them for their grandchildren to put on their bicycles. From their bicycles, the grandchildren can then put the spirit bells on their motorcycles or in their cars.”

Snyder, an unapologetic Donald Trump fan, also began offering Trump merchandise at American Patriotic Supply. The Trump items seem to pair well with the military items. After all, CNN exit polling in 2016 showed that Trump won 60% of the veteran vote, while Hillary Clinton won 34%. In addition, 22 Medal of Honor recipients endorsed Trump in 2016.

“We did the Trump 2020 rolling rally in October and I had the best day of sales in seven years,” Snyder said. “There were more than 1,000 people there. I did more business in four hours during the rally than I did in five days at the SantaCaliGon Days Festival.” Snyder believes in helping fellow veterans.

“A portion of everything I buy from vendors goes to the vets,” he said. “We also have a fund here that I use to help homeless vets. I give the homeless vets five dollars to go to Dillon’s to buy a chicken dinner. When they come back
after buying a dinner, I give them another five dollars to spend on whatever they want. That way I know the first five dollars was spent on food.”

Customers can add to the fund by placing money in a jar Snyder has placed near the cash register. Customers who contribute receive a free American flag pin. Snyder also gives flag pins to children who recite the Pledge of Allegiance.

Snyder is proud of the fact that American Patriotic Supply is community-oriented. “It’s not about what we do,” he said.
“It’s about what we can do for the people who come in here.”

Carrie Hagemann is an example of someone Snyder is helping. Hagemann’s father, Richard Hagemann, is a former Marine (1967-1969) who served in Vietnam. Senator Pat Roberts, also a former Marine, helped Carrie get a list of her father’s military awards, which includes a Silver Star, the United States Armed Forces’ third highest personal decoration for valor in combat. The citation for Cpl. Hagemann’s Silver Star is available at valor.